A little while ago, we visited the remarkable team at TEARS and interviewed Wendy, their marketing manager. TEARS does much-needed work in various communities in and around Cape Town. Over and above providing a home for abused, abandoned and homeless animals, they also have a mobile clinic that treats animals in need.

TEARS was founded by three women who noticed that animals in Masipumelele (Masi) were suffering – and so they did something about it. Initially, the small team provided dip for mange and tick and flea treatment. Over 22 years, it’s grown and evolved to what it is now. 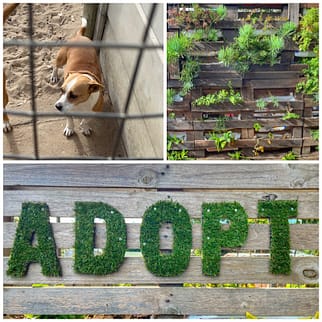 One way to help TEARS is by contributing to their greening areas. It helps the dogs and people stay happy!

TEARS is based alongside Masi, and the team reflects on the impact the organisation has had on the animals and people of immediate community. Twenty-two years ago the animals were in poor condition, there was no accessible animal welfare, and most animals were unsterilised. Nowadays, the animals of Masi have are overall in much better condition.

TEARS has established enduring relationships with the people of Masi, and they work closely with community leaders who understand the social dynamics and context of the animals and people that live within the neighbourhood. Wendy reflects that the Masi community, in particular, has extreme pride in the condition of their animals. Unfortunately, TEARS don’t see this same pride and love in every community they serve.

Having TEARS close to the people and animals who need them makes the organisation and their services accessible. Having said that, they also serve Vrygrond,  which is much farther away. Despite the SPCA being relatively close to Vrygrond, many locals still opt to use TEARS when seeking help for their animals. We discuss the mixed reputation that the SPCA has, and Wendy explains that the bad publicity the SPCA receives is entirely unfounded. The SPCA does highly demanding work under trying circumstances with limited resources. They are just as passionate about rescuing, rehabilitating and rehoming animals as any other animal welfare organisation and their services are often underappreciated.

Yes, we fell in love with all the dogs we saw there <3

Easy to reach, happy to help

TEARS try to be as accessible as possible and find that many people contact them via their social media channels. There tends to be an expectation that TEARS should be available to help 24/7 – which just isn’t possible. TEARS often get contacted at unsociable hours – a 4am call isn’t unusual – but because some areas are high-risk in terms of gang presence, they have to wait until daylight till they can tend to the situation. If it’s a dire emergency, the team on call may agree to meet at the police station. TEARS also hold their mobile clinic at the police station in Ocean View for safety reasons. Their drivers have been held the gunpoint in the past.

Reflecting on how many people still fear dogs, we ask whether TEARS has noticed a generational shift in how people, especially children, relate to animals compared to 20 years ago. Wendy explains that it’s in fact, often children who come to TEARS with puppies or kittens that they’ve found. TEARS employee and community leader Sive is the go-to man for children and adults who reach out. Sive is passionate about educating children about animal welfare and has been with TEARS for many years. People contact him at all hours, and he always makes himself available to help. He has a good standing in the community and is well-respected. People understand that he’ll not only do good by them but also by the animals.

As a local, Sive understands his neighbourhood’s culture, context and people. He’s noticed that culturally, as well as generationally, there’s been a shift in the way that animals are perceived in South Africa. TEARS have noticed that instead of people viewing their dogs merely as “yard guards”, they now view them as creatures that they can have a meaningful relationship with.

One of the living walls is a wall of rememberance for the sweet dogs that have passed over the rainbow.

TEARS have also noticed a generational shift in attitude regarding ownership of dogs across all communities. Whereas Gen X’ers may have desired “pure breed” dogs, younger generations understand the importance of having a more sustainable approach.

Millennials and Gen Z tend to be more ethical about dog ownership and are inclined to focus on the personality and character of their pet rather than the status and looks of the animal. In addition, younger generations support the concept of sterilisation. They’ve challenged outdated attitudes that imply that all female dogs need to have at least one litter and that male dogs “need their testosterone” and therefore shouldn’t be sterilised.

Whereas some breeds are still seen as status symbols – like pitbulls – organisations like TEARS are slowly making inroads in attitudes – where they can – especially regarding the illicit breading and sale of power breeds.

We discuss the traditional view of rescue animals, where many people perceive rescue animals as risky and unpredictable because owners don’t know their pedigree (or history). Wendy explains that this is an outdated approach. She also highlights that most rescue animals have spent at least six months in expert hands at a shelter and may have a more traceable history than puppies acquired from breeders. Regarding breeders in general, TEARS warns against buying dogs online – particularly if you haven’t personally visited the breeding facility to audit the conditions the dogs.

Regarding reducing the number of unwanted dogs, TEARS are grateful that Cape Town has passed a by-law that insists that animals are sterilised. They explain that unsterilised males are at risk because they tend to roam, which puts them at high risk from motor vehicle accidents. Unsterllised males also more at risk of fighting and unsterilised females have a higher risk of getting cancer. The SPCA states that sterilisation “prevents many of the diseases that unsterilised animals suffer from like uterine infections and mammary tumours, testicular cancers and anal tumours – all conditions that require emergency surgery or are expensive to treat. “

Prior to our interview with TEARS, we didn’t know that popular media has a huge influence on the acquisition of specific dog breeds. TEARS termed it the Game of Thrones Effect, because during (and after GOT), there was an increased demand for Husky dogs. TV shows and films can create a demand around a specific breed – there have been crazes to own German Shepherds, Boston Terriers, and Dalmatians. Perhaps it’s time for more films and TV shows to feature mixed-breeds and rescue dogs!

Dogs have such simple needs and having company is one of their needs. They all rushed up to say hello!

One of TEARS biggest initiatives is called Break the Chains. In South Africa, chaining your dog is not illegal. Dog owners are allowed to chain their dogs in South Africa, provided the chaining method complies with the Animal Protection Act. Sadly, the chains on animals seldom comply with this Act.

This Act stipulates that your animal should have freedom of movement, adequate shelter, and is not being forced to live amidst its bodily waste. Accordingly, a running chain is the kindest way to keep a dog confined without cruelty. Of course, fencing is more humane, but for communities with limited resources, fencing isn’t affordable – which is why dogs end up being chained.

Running chains are relatively expensive to install – around R600 per running chain set up – which is why TEARS have started this initiative. Whereas they understand that owners are trying to be responsible by keeping their dogs in the yard, they have borne witness to the suffering of chained animals.

The TEARS initiative offers a chaining solution whereby they install a running chain for the dog, provide food and a proper kennel, educate pet owners, and otherwise make sure that the situation is compliant in terms of the law.

It’s been hard to get funding for their Break the Chains initiative because it’s not an “attractive” cause. In an ideal world, the law around chaining animals would be changed and would insist that no animal was chained. However, until that happens, running chains are the only vaguely kind solution for animals. . Running chains are light weight, allow for free movement, and don’t get twisted and tangled. Any other chain tends to get twisted, increases tension, and leads to injuries to the animal.

(Grab some tissues and have a look at their Break the Chains video.)

Education will always be key

TEARS are passionate about community education and are in the process of setting up an amazing education programme that teaches children how to love and care for their animals. With this project, their aim is to press a “generational reset button”, where the youth are given knowledge that allows them to relate to animals in a new way. It’s also to help them see the logic in sterilising their animals, vaccinating their animals, visiting the vet, and providing the best possible food that their budget will allow.

TEARS are in the process of generating funding from donors. They’re specifically targeting corporate donors who understand how children and animals intersect and see the value in creating mutually beneficial relationships that ultimately lead to better outcomes for everyone.

Many children are raised in single-parent households, and in many two-parent households, both parents work. For latchkey children, a pet is a godsend because instead of being alone, they have company. Wendy explains that for many children, one of their most vital connections is between themselves and their dog. For many, their pet is their “safe space”.

Take a look at some of their outreach videos.

We spend some time discussing the rehoming procedure. TEARS, like most animal welfare organisations, has stringent home checks before allowing a pet to be adopted. This is to ensure that the dog or cat is not put at risk in any way. It’s also to ensure that owners understand what’s expected of them. Lack of education is an enormous issue that cuts through all cultures, communities and demographics. This lack of education often amounts to a lack of compassion that’s borne out of ignorance and benign neglect, rather than deliberate cruelty.

Wendy also highlights that many people don’t understand why there’s an adoption fee when the animals need homes. She explains that not only does the fee cover the sterilisation of the animal, the adoption fee also goes towards the cost of creating an ongoing legacy so that other vulnerable companion animals can be taken care of.

TEARS also have a programme that helps community (feral) cats. They work with the Do More Foundation and Catmor to provide food for cats that are either feral, or are abandoned and homeless. Part of their programme also makes sure feral cats are sterilised before they get released back to their habitat.

We’re so grateful for the work the TEARS do for people and animals. It was a privilege to find out more about their various projects and to witness the passion that they bring to work every single day.

Visit the TEARS website to donate or you can also support them via their online shop.

Posted in NGO Support.
Share
NextDogs and decor: by Design