Just before International Day of Education – which fell on the 24 January – we were lucky to interview Nina and Michelle from The Underdog Project (TUP).

What do The Underdog Project do?

The Underdog Project is a registered NPO and PBO that works with vulnerable children and shelter dogs in Cape Town. The children are partnered with untrained shelter dogs and are taught positive reinforcement dog training techniques, as well as how to interact with and care for animals.  TUP focusses on humane education activities that benefit both the animals and children

Qualified facilitators and experienced dog trainers show the children  how to teach dogs basic skills like sit, stay and paw, as well as some basic agility. Sometimes, all they do is cuddle, groom, and read to the dogs. The project is a genius program that attends to two huge areas of need. It’s proved to be an effective therapy for both the children and shelter dogs. 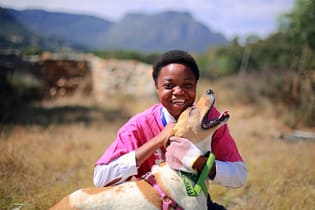 We asked TUP where they think the most education is required around animal welfare. TUP’s central ethos is that animals are sentient beings. Once children learn this it raises their value of animals in general. Children are taught that animals, just like humans, have needs which aren’t so different from ours.

TUP’s insights are that lack of knowledge around caring for animals is not limited to underprivileged communities and schools. Humankind has inherited a lot of misinformed beliefs about what animals are, and how they should be treated. We’ve certainly come a long way, but TUP suggests that children from all communities require education around animals.

When asked about the prevalence of cruelty and neglect of animals, TUP have observed that many of the children imitate the adults around them. For example, when children see cruelty, or alpha/dominance training that uses force and punishment, children accept that this is the only way that they should relate to animals.

Teaching children how to care for animals indirectly reduces violence between humans. By showing and teaching love, care and compassion, children understand how they should treat others and how they should be treated. TUP offers children and dogs great healing in a non-confrontational way.

Nina and Michelle tell the story about a boy who came to their program. As a result of trauma, the boy was an elect mute. He didn’t speak for many sessions, but eventually, the facilitator noticed when he gently took the dog to a quiet corner of the garden and spoke to it quietly. Slowly the healing began and mutual trust was forged.

In teaching the subtleties of understanding emotions in animals, children and adults create a greater literacy and understanding around their own emotions. The Underdog Project provides a safe space to explore feelings without the pressure of talk therapy. It does much to reduce learned-helplessness, because in seeing how they can affect positive interactions with animals, children can learn that the can affect change in the world.

Compliance vs Willingness | Tolerance vs Enthusiasm

Alpha/Dominance training forces compliance that stems from fear. This is in contrast to positive reinforcement, which fosters willingness and trust. TUP has observed that Alpha training is often used because it makes humans feel powerful, dominant and in charge.

Alpha/Dominance training essentially takes an owner-centric approach, which likely won’t lead to better relationships between dogs and their owners. Many humans expect dogs to constantly show restraint. However, TUP observes that owners should first and foremost be the ones who show restraint. Not unlike humans, behaviour is best taught when modelled.

TUP only uses positive reinforcement. There’s no forcing and no punishment. We didn’t know this, but apparently some dogs may even understand shouting – or shouting in general – to be punishment (#sadface). (Side note: a dog behaviourist once told us that when we shout at dogs when they bark, the dog understands that we’re joining in. Logical, when you think about it really.)

Children at TUP are taught to reflect on their responses to animals and to consider what their responses might be teaching the dogs. For example, when dogs run off and show poor recall, owners typically shout at them when they return. The dog, however, learns that it gets shouted at for coming back – rather than for running away. In that way, dogs are much more literal and immediate.

There’s a spectrum of knowledge that’s passed onto the children who learn at TUP. The facilitators believe in meeting people – and animals – where they’re at. Once basic knowledge around caring for dogs has been acquired, they move on to teaching more subtle things, like reading animal’s body language, understanding dog’s emotions etc.

Research has revealed a link between children who abuse or show violence towards animals becoming perpetrators of violence in adulthood. TUP explained that the cycle of violence is such that when children are exposed to violence, one of the ways they make sense of it is to normalize it. They do this by acting out abusive behaviours or violence themselves – often on other children or animals. And so the cycle perpetuates.

Children tend to grow up accepting the “role” that dogs play in their homes or communities. For example, if children grow up seeing dogs on chains, see dogs as “fighting dogs”, or as protectors, children will accept that as normal. That’s why adult education around animals is just as important as educating children.

Over and above lack of education, another source of antagonism between children and dogs stems from the fact many dogs roam free. Many are unsterilized and some might be hormonal which makes them unpredictable. Left to their own devices, dogs can form packs – which can be intimidating for children. When a dog – or pack of dogs – approaches or barks at a child, it creates fear. TUP has observed that children AND adults are often fearful of dogs, which is why they see many people carrying stones to defend themselves. This is another cause of the cycle of fear that exists between animals and humans.

Having said that, TUP explained that in the communities where they work, neglect and even cruelty isn’t necessarily borne out of malicious intent. Rather, their experience is that these phenomena stem from extreme ignorance. Many people think that domestic animals  – being animals – can forage and fend for themselves. They simply don’t know that domesticated animals not only need shelter, food and clean water daily, they also need stimulation, exercise, and a sense of safety.

The good news is that once informed, pet owners generally improve their behaviour towards their dogs. Most try hard to do the best that they can with what they have. TUP has found that approaching pet owners with non-judgement, understanding and a willingness to listen is the best approach. Approaching pet owners with anger, judgement and criticism creates more tension and ultimately tends to elicit resistance, rather than change of behaviour.

Another cause of suffering for animals is the prevalence of humans struggling. Daily stressors, hopelessness, sleep deprivation, limited resources, and stress in general can impact how animals are treated. When humans experience stress, it creates underlying sense of frustration and irritability. Sadly, this is sometimes acted out on animals. Again, when children see this, they understand this to be normal, rather than an aberration of the relationship between nature and humankind.

The phenomenon of taking stress out on others spans all strata of societies, all demographics, and all communities.

As of late last year, the COCT amended the Animal Keeping By-Law. It’s now mandatory to have animals sterilised, unless an exemption is granted in terms of the by-law. All dogs and cats over six months must be sterilized. This has been a progressive move as it will do much to reduce the suffering of unwanted animals. TUP cited the effective work done by DARG whose field workers who are au fait with the condition and ownership of animals within the communities they serves. The new by-law empowers field workers such as these to uplift animals who are suffering and are unsterilized.

Dogs, Society and Social Media: What do you expect?

We asked TUP about the ethics around animals and content-creation for social media. They raised an interesting and prevalent phenomenon: anthropomorphising animals.

While attributing human traits to animals has been hugely beneficial to our understanding of animals as sentient beings, it can result in unrealistic expectations being placed on animals.

The bottom line is, any content that’s produced should be dog-centric. Dogs might share many of our needs but they’re dogs after all – not humans, babies, dolls, puppets or props.

TUP shared insight they recently received from a dog behaviourist. She observed that there has been a marked evolution in the role that animals play in our lives. While this evolution is largely positive, there are some down sides.

In previous eras, the dog was viewed as “the dog.” A slightly less-connected family member that may have slept outside, but was still integrated into family to a degree. Fairly recently however, the role of dogs has become more central to the family unit and to home-life overall. While this generally fosters strong human-dog relationships, it can result in more pressure and weighted expectations being placed on the animal.

Sometimes, this pressure is too much. Adults and children should always ask the question: does the dog really want this treatment, or am I expecting too much? If the dog is tolerating something, rather than enjoying it, it’s likely only a matter of time before they snap or bite. Sadly, the dog often gets blamed for responding this way, but it comes down to lack of respect for the dogs free will.

In this way, decisions at TUP are based on placing equal value on the needs of the child, as well as the animal, so that the interaction is beneficial to both.  Part of TUP program is learning to understand which dogs enjoy interactions, and which prefer to be left alone. They also teach children to know when enough is enough.

They’re taught to recognise immediate signs of stress, which include: flat ears, whale eye, tail between legs, growling, panting if not hot or exercising, pacing and restlessness, shaking, yawning when not tired, licking lips or nose if they haven’t been eating, and whimpering. Excessive barking can also considered to be a sign of stress.

Children are taught that when a dog is lying down, they most likely want to be left alone. They’re taught the correct way to greet a dog is to first ask the owner, and that you shouldn’t invade a dog’s personal space. Many dogs don’t like hugging – especially from strangers. Hugs can make them feel constrained (#smotherlove). They also don’t like having a hand thrust in their face. If you look closely, you’ll often see dogs turn their face away if you try and elicit affection. This is a sign that they don’t feel comfortable and don’t want to interact intimately.

TUP teach children that if you see a dog, you should first call it by patting your legs and calling it rather than approach it outright. If the dog doesn’t respond, they don’t want to interact. (Side note: this should become mandatory for humans too J. Especially at cocktail parties. LOL.)

We asked TUP what they would consider to be the main takeaway points for adult and child education around animals. This is what they said:

What can YOU do to make a difference?

Michelle did her training through COAPE which is all about positive reinforcement. You’ll find some fantastic resources here.

To learn more about The Underdog Project, click here

Posted in Products.
Share
PreviousDoes my puppy need its own bed?
NextWhat is a dog car seat hammock and do I need one?